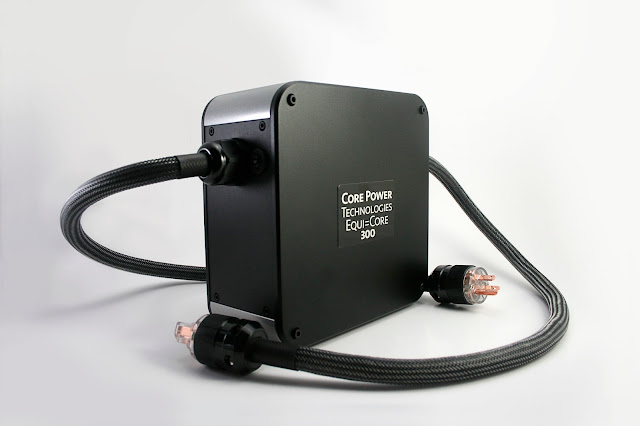 I have a lot of experience with power conditioning as it pertains to the audio system. Power cords, Power conditioning, Power supplies, and in-wall power. I've heard, expermented, tried, failed and succeeded at just about everything power as it relates to an audio system. Power is important. Wait, let me rephrase that, CLEAN power is important. It can make or break the performance of an audio component or system.

Core Power Technologies is a relatively new company making power cords with a balanced audio transformer wired in. A person can use them on a single component, or plug them into a power strip and use the balanced power to supply several components. They offer 5 models of their Equi=Core models, differentiated by the amount of power they can safely handle without limiting current. They make 50, 150, 300, 1200 and 1800 watt versions.

Our normal AC at the wall outlet consists of three "legs", hot, neutral, and ground. On the hot side,  +/- 120v of Alternating Current (AC) is presented, and it is said to possess 120 volts to ground.

Balanced power "splits" the 120v current into 60 volt legs. +60 on the hot and -60 on the neutral. There are still 120 volts present on the circuit, but it is now divided up, with the two AC legs being 180 degrees out of phase with one another.

With the 2 AC legs being out of phase, the noise riding the AC lines is cancelled out, but 120 volts are still delivered to your audio components. This is what makes balanced power such an effective noise reducing agent.

To figure what components I could safely plug in to the Equi=Core 300 I had to consult the owner's manuals for the components I own. When they failed to mention wattage consumption, I looked at the value of the internal mains fuses (given in amps) and multiplied that times the voltage (120 volts).

So the Aqua La Scala was out, but I could use the 300 on the Aries and Taurus. I decided to allow the Equi=Core 300 to power both the preamp and my streamer via a Wireworld Matrix power strip. The Equi-Core would be working at about 1/3 of it's capacity, leaving lots of headroom in case it was needed. Headroom is always good.

Before we go any further, let me tell you what was filtering the power to my system. The same thing that has been filtering the power for 8 years, the Bybee Stealth. Nothing has displaced it as my ultimate reference. I can count only 2 other conditioners that came close, and they both cost much more. It was a totally unfair comparison with the Stealth costing over $6,000 and the Equi=Core costing only $899 as configured. But that is my measuring stick, and what I am intimitely familiar with.

I plugged the Equi=Core 300 to the wall, and connected the other end to a Wireworld Matrix power strip. The Matrix is a classic. Inexpensive and does no harm to the current being delivered through it. That made it perfect for connecting the Equi=Core to more than one component. The unit I received from Core Power Technologies was new, so I left the components on 24/7 for about a week before writing up my evaluation. That being said, straight out of the box the 300 made a noticeably quiet presentation.

I will get straight to the point. The $899 Equi=Core 300 was quiet, did not limit dynamics, and did not change the tonal characteristics of the music being reproduced. First the quiet, I expected this. Balanced power is quiet, but usually the transformers involved in this process can slow current delivery, or alter the tone of the music. None of this happened. Even with the added integral power cord, which is another item that can limit dynamics or change the tone. This thing was transparent, and able to easily deliver current to the Aries and Taurus.

This is important, because anti-power conditioning audiophiles lodge these 2 reasons as to why they go "straight in to the wall" more than anything. Many times their gripe is legit. Many power conditioners are fraught with a tradeoff. You can have clean mids and highs, but you will lose dynamic range. You will have a great midrange, but the highs may be rolled off. This did not happen with the Equi=Core. The Equi=Core impressed the heck out of me with it's tranparency. I expected the quiet, as I am familiar with balanced power. I did not expect this thing to be so darn transparent. The transparency is what makes the Equi-Core 300 such a killer value. Anything else I have heard in this price range either alters the tone or squashes dynamics. You usually have to pay A LOT more to get this kind of performance in a power conditioner.

Did the Equi=Core beat the Stealth? No, but it gave me 80% of what the Stealth does, and that to me is impressive for something that costs $899. I eventually plugged the Equi=Core into the Stealth at one point, allowing it to power the Taurus and Aries. The preamp and streamer were getting power from the Equi-Core, which was being fed power from the Bybee. What I got was an even blacker background than from the Stealth alone, with no sonic tradeoffs. Now if tradeoffs were going to show up, they would show up in this configuration. None, nothing. Just more quiet, and more music. Very impressive.

The Equi=Core 300 delivered clean, quiet power unlike anything I have heard in it's price range. This would not only benefit smaller, budget audio systems. It would be perfectly at home in very high performance audio systems. It could be used as a solo power conditioner, plugged into a power strip, or several could be used, each feeding individual components (within each Equi=Core's rated output of course).

Posted by tweek geek at 8:25 AM No comments: Links to this post

The Stillpoints Aperture acoustic panels represent a whole new form of acoustical treatment. Each 22" h x 22" w x 3" d Aperture is actually three products in one: an absorber, a diffuser, and a resonator. They cover a broad frequency range as well, from 40Hz to well over 20 kHz.

According to Stillpoints, what makes the Apertures unique is their ability to continually adapt to the dynamic changes in the amplitude and frequency of the music. They say that Static, conventional acoustic treatments that offer one continuous level of absorption or diffusion may offer too much absorption at low levels and not enough at higher ones. The Stillpoints Apertures utilize a blend of absorption materials, and a unique design of internal chambers to trap acoustic energy. The diffusion portion of the Stillpoints Aperture breaks up the wave forms which will ad mid to high frequency absorption and reduction. The resonator portion offers control of the lower frequencies only when it's needed.

John Miller from Stillpoints was kind enough to send me several Apertures and stands in order to familiarize myself with their qualities, and to compare them to the plethora of acoustic treatments I already have in my listening room.

My listening area is located in a walkout basement. The immediate area where the speakers are located is 20' wide, which narrows to 15' from the left side after about 10', but then opens up on the right side to two doorways positions at roughly 45 degree angles with a stairway at the center. It then narrows to 14' for the remaining length of the room. The picture below leaves out the doors and stairs to the right, but you get the idea. It's a large, long room. It reproduces low bass really well, but has some issues with the midbass and lower midrange. This is due, I suspect to the little alcove adjacent to the left speaker.
Before the Apertures, I had spent quite a bit of time getting my listening space optimized. I had hung rails near the ceiling in the listening area and used these rails for hanging the acoustic treatments. It worked extremely well. I could swap out absorbers and diffusers, and could place them horizontally and vertically along the walls without leaving a bajillion holes behind.
I also had hung 3 Sonex panels on the ceiling above the listening position to help with the slap echo from the wall behind the listening position, and to absorb some of the directly radiated sound. I like the Sonex on the ceiling for another reason. Should they become detached and fall they won't kill anyone since they are made of very lightweight foam.

The first Apertures I stacked vertically and centered them on the wall behind my speakers. They replaced a Sonex Whisper wave panel which won out over a GIK diffuser in that location.  With the Apertures in place, I felt the center image remained centered and depth had a little more clarity to it. What was shocking was I heard more detail, especially at lower listening levels.
I then added two more panels, one on each side and slightly in front of my listening position. These two Apertures had replaced the GridFusor diffusors. The soundstage remained wide, but was more focused with the Apertures. The GridFusors worked great in this location, especially for the money, but the Apertures just seemed to add more clarity, quiet and focus to the sound. Again I was hearing more low level detail, especially in the high frequencies.  The 4 Apertures as a whole seemed to help my speakers create a more balanced soundfield within the room.

The most impressive feats of the Apertures were yet to come. I left the 4 Apetures up, and then I removed all of the bass traps in the room, 4 total. These were pretty massive, fairly expensive traps from Acoustic Geometry. They did the job fairly well (or so I thought) making the bass response in the room a bit flatter. I have an oddly shaped room that trapped lower midrange & midbass. Things could get quite boomy and congested with no traps, and I was made very aware of that fact after listening to the room once the traps were removed. Ugh.

I placed 2 Apertures in the corners nearest the speakers, 3 corners and 6 Apertures total. The Apertures seemed to exhibit a little better control of the resonant frequency than the bass traps, and the lows were magical. Not a term usually used to describe bass, but damn. It was controlled, balanced, fast, dynamic. It was lifelike. This was hard to believe just due to the smaller size of the Apertures compared to the Acoustic Geometry bass traps. The effect the Apertures had on the bass made it's way through the upper frequencies as well. Everything became faster, more dynamic and clearer. Even when the volume was at ridiculous levels, the sound stayed the same.

Here is what I liked about the Apertures: They quieted the room, made the entire frequency spectrum more balanced, spacious, dynamic and lifelike, and they were tiny in comparison to the conventional treatments. They were finished nicely as well. I forgot to mention that one can have art or photos printed on removable grills that can be inserted into the frame of the Aperture. This could give the Apertures a more artistic appearance in one's listening room. If done well, it might be hard for the average person to tell that they were indeed acoustic treatments.

Due to budget constraints, the Apertures didn't completely eliminate my usage of conventional treatments. But my guess is they could. I will continue to experiment as time and funds permit.  Bruce Jacobs of Stillpoints will be dropping by in October as well to do a final tweaking of the room, but what I have so far allows my system to create the best sound it ever has. The apertures are not inexpensive, but a few go a long way. The nice thing is you can start with one or two, and build from there.

Get Tweek Geek Speek in your Inbox