Does Jack B. Sleep?

It would seem that he doesn't. Perhaps, like our president-elect, he survives on very little sleep. All I know is with the prodigious amount of tweaks that he produces, he can't have much time for sleep. For every one tweak that actually makes it to market, dozens are tested and tossed. Jack has been developing cutting edge, often controversial (to those who never hear his products, but authoritatively pontificate on forums) tweaks longer than I have been the Tweek Geek.  I met him in 2000 and was "converted" when I tried a set of his Purifiers on my Legacy Audio speakers. I remember the moment. It was jaw-droppingly good sound like I had never experienced before. I had good equipment, B&K, Legacy audio, Kimber Kable, but the Bybee Purifiers were the icing on the cake. I was so excited about them I had to tell everyone, so on to the forums I went. Wow, that was another experience I won't forget, but don't care to discuss because it's irrelevant, and Jason Victor Serinus' most recent Stereophile article covers the topic in a positive, very well worded way.

The Active Room Neutralizer (ARN) is a white rectangular shape about 2" wide, by 6" long and 1/2" thick. A thin, 10 foot long white AC cord  eminates from the bottom and is terminated with pretty standard 2 prong AC plug. Inside the plastic cover is a proprietary blend of materials that when activated by AC, resonate with the air molecules in the room, enabling the transmission of sound without the usual time misalignment of frequencies. They work well with other room treatments such as the Steinmusic Harmonizers, Shakti Hallographs and Stillpoints Apertures.

The instructions say to attach them to a wall with blu-tak or similar adhesive. They need to be around 5 feet off of the ground. Where you place them in your listening room depends on how many you have. Experimentation is always key.

Break in is also key. Although you will hear something almost immediately, they will continue to improve over several days. Give them at least 48 hours of being installed and plugged in before evaluating, and another 48 before rendering judgement.

I knew it would take awhile for the ARN's to acclimate/break in to the new listening space, so I unboxed them the afternoon they arrived, plugged one into the wall behind the speakers, and the other into a position behind my listening seat. Being the holidays, there were plenty of activities to occupy me for the next 48 hours, so it was easy not to "peek" at the results.

Two days later, we came home late from one of our holiday activities, and I went downstairs to unwind a bit while listening to some music. Unwind I did. So much so I fell asleep! Usually a good sign that the system was not suffering any ill effects from the newly installed tweaks. Alas, the critical listening would have to wait until tomorrow morning.

With the next morning, I headed to the listening room, with coffee, pad, and pen. Below are a few tracks I listened to while evaluating the ARN's.

Patrick O'Hearn, I Could Live Here - Slow Time: This opens up with some bongo drums lightly played in an acoustically ambiant space, with a backing synth track. It's good for checking soundstage. A piano starts playing single keys, adding to the sense of ambiance. About 2 minutes into the track the bass line comes in low, giving a great feeling for bass depth of the system. The tune swirls around the room, behind the listener and enveloping one in the space of the recording. With the Active Room Neutralizers in the system, I forgot about the room I was listening in, and felt transported to the actual venue. I had also picked up on some small details within the track. Synth lines that floated around the room, very low level but more noticeable with the ARN in place. This was a familiar effect that occured over most recordings.

Jennifer Warnes, Ballad of the Runaway Horse, (Unknown version): This opens up with an acoustic bass and jennifer's vocals in an ambient space. I listen to the acoustic bass for the artist's fingers plucking the strings, for the tone of the instrument, and for the sense of space it resides in. I look for the naturalness of tone and texture in the bass and Jennifer's voice. I look for the layering in the vocal harmonies by the accompanying singers. There is also some interesting playing by a cello in the background at a very low level. Only a very resolving system can get every nuance of the cello. With the ARN's in place I felt like I was in the recording space, not my room. There was a sense of naturalness that lent to a very realistic portrayal of the bass, cello and voices. The low level information was more evident than without the ARN's in place, the tone and textures were simply amazing. The best I have heard my system sound.

Trentmoeller, Evil Dub, The Last Resort: Recorded in Q Sound, it offers up a huge, wrap-around 3-Dimensional sound on a well set up system. The bass is deep, pulsing and nuanced. Believe it or not, the little bleeps and blips on the song can either sound flat, or have a bit of decay on them, depending on the resolution of your system. With the ARN's in place the decay was clear, as were many other fine details in the mix.

Stop Swimming, Porcupine Tree, Porcupine Tree: A Haunting, sad song that is fairly well recorded. The song opens with drums that are dynamic with a sense of space around them. It continues with piano, solo vocals synth and a bit of orchestral backup. It draws you in, and relaxes you at the same time.

I have heard tweaks that produce a holographic effect at the expense of losing image focus, this is not one of those tweaks. It creates a huge sense of width, depth and holography without the loss of image focus. I can literally find no tradeoffs with the Active Room Neutralizers. At least for my sonic tastes and in my system. Everything is clearer, more natural, more spacious with microdynamics, textures and low level resolution.

This relatively simple looking device has rocked my world, and being the "Tweek Geek" that is saying quite a lot. I am surrounded by tweaks and have been for nearly 14 years now. For at least 7 of those 14 years, the Stein Harmonizer system has been my absolute reference, desert island (provided there is AC) tweak. Whenever a new customer would ask "what is the best tweak you offer" I always replied "Hands down, the Stein Harmonizer system". Now I have to qualify statement in light of the stellar performance of the Active Room Neutralizers. If you don't have a minimum of $2k to plunk down on a Stein Harmonizer system, the Active Room Neutralizers are absolutely the best tweak I have to offer and have heaard in quite some time. 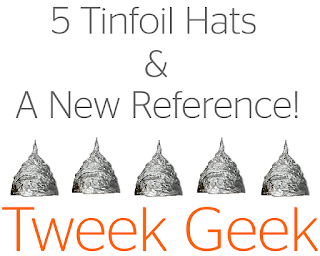